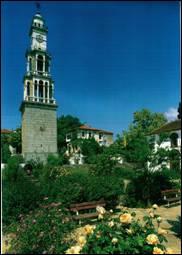 Argalasti is a hilly village of Thessaly, Magnesia regional unit in Greece. According to the 2001 census, its population is 1,312 residents. During the last administrative division is the seat of the municipality South Pelion.

Argalasti is built on a fertile field 40 km southeast of Volos, a weighted average altitude of 250 meters above sea level (196 meters to the main square). It is a major tourist (and local shopping) center in the region, as one of the village with a rich cultural tradition and a landmark for those heading to the nearby beaches of Pagassitikos (grass, reed, LEFOKASTRO) or the open Aegean (Sprinklers, Ink , Paltsi). The region is very fertile and produces oil, grains and fruits. Also thriving livestock. Excellent example of local architecture of the early twentieth century is the steeple of the church of the Holy Apostles, and embedded in the walls of many structures are parts of ancient and medieval buildings, which adds to the ambience of the village. The entire settlement is visible from the Monastery of St. Nicholas Pau.

You can find out more about which cookies we are using or switch them off in settings.

This website uses cookies so that we can provide you with the best user experience possible. Cookie information is stored in your browser and performs functions such as recognising you when you return to our website and helping our team to understand which sections of the website you find most interesting and useful.

You can adjust all of your cookie settings by navigating the tabs on the left hand side.

Strictly Necessary Cookie should be enabled at all times so that we can save your preferences for cookie settings.

If you disable this cookie, we will not be able to save your preferences. This means that every time you visit this website you will need to enable or disable cookies again.